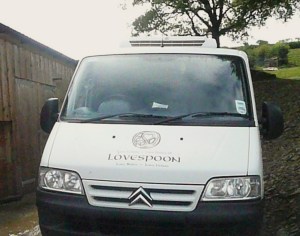 our new freezer vehicle!  It’s not the one we’d originally intended to buy but is actually significantly better (& cost about £9k more – ouch).  Whilst not brand new it’s only had one apparently careful owner &  sports an unusually low mileage.  In terms of temperature it can cover a very broad spectrum; so we can carry anything from ambient to chilled produce or (naturally) gelato, as required; going right down to a positively frosty -30°C!  So a handy vehicle to have.

Additionally important is that it has a single-phase standby facility which means it can act as an emergency or overspill freezer, if needs be.  Whilst this might not initially appear to be a critical consideration – & many similar-type vehicles don’t have it – we decided the extra investment would be worthwhile; particularly as at present there’s a fault with the door on Food Centre Wales’ main dairy freezer – it keeps popping open but without tripping the alarm, which is worrying as if it should happen over a warm weekend we could lose our entire stock – £1000s’ worth.  Also their freezer unit has been labouring, alarmingly with the fans icing up; so at least this way if something did happen we could salvage the majority – quickly, too.  Because although we could claim on FCW’s insurance for any losses incurred that’s not the issue: it takes time to build up a decent stock when you’re only permitted to produce for a couple of days per week; especially as with the summer season rapidly approaching we have to make the most of what we can get.  Also the standby facility is also very handy for larger shows & festivals; as you can carry a significant amount of stock without worrying about running out.

This van is also very comfortable to drive, & handles like a car (although the growl of the freezer unit kicking in, takes some getting used to!).  We were considering a smaller vehicle  – about the sixze of a ‘Postman Pat’ van; however once they’re fully insulated they have an extremely limited carrying capacity & at least we’ll ‘grow into’ this one rather than rapidly ‘growing out’ of it & having the worry of Yet More Investment only a little further, down the line.

The only ‘downside’ is that decent freezer vehicles are few & far between on the second-hand market.  Chiller vehicles on the other hand are readily available & I do know some people would opt for the cheaper alternative, storing ice cream in insulated boxes in the back; however not only is it technically in breach of Food Hygiene regulations there is also the continual concern regarding degradation of stock quality – & of course, you don’t have that gem of a standby freezer should either yours pack up nor short-term frozen storage at shows.   But being so hard-to-come-by we had to collect this little beauty from a refrigerated vehicle specialist based in Poulton-Le-Fylde near Blackpool; which for us is a good five-and-a-half hour drive away across the dramatically scenic, winding  mountain roads of Snowdonia.

On the way home we paused for a meal at a little place we know, on the outskirts of beautiful Bala Lake; which made the journey a bit more tolerable.  As it was our first outing Tony drove the van & I took the car, as I wasn’t used to driving a larger vehicle (& he of course, is used to ‘driving’ something far bigger – with wings on!) – however I’ll have to take the wheel ere long I suppose as another of my ‘many hats’ is that of delivery driver!  But with its smart new livery (courtesy of our patient-&-talented designer, Jamie from Action Graffix) we’ll certainly add style to the local tarmac! 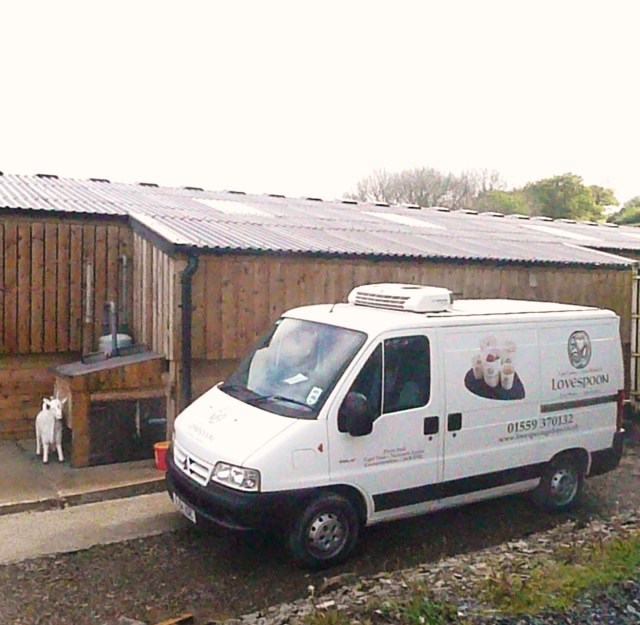 All-in-all it’s been a busy week with another hugely informative True Marketing course on Public Relations, held over in Abergavenny (which also generated another impromptu trade inquiry – fantastic) & a trip to the coast to restock with straw – where we also discovered we can get bales of sweet, fresh lucerne & pea straw; which are highly nutritious & will be of significant benefit to our goats’ diet.  There was a single bale of lucerne left, which we bought to whet the Milkforce ladies’ appetites; whilst it looks tough & horrible it smells divine & the goats polished it off like a school of starving piranha – so it must be good!  Only the best for our girls.

And at least it’s not raining….much.

2 Responses to Chariots of Ice